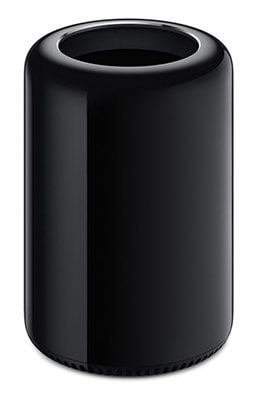 The computer has a single whisper quiet fan but Apple traditionally prefers acoustics levels over actual thermals. In this post we demonstrate this behaviour and explain how to improve it.

To stress test the CPU we’re going to perform testing in Windows because of a little nice app called powerMax. It’s able to torture CPU unprecedentedly with AVX CPU instructions (they heat up CPU badly, be very careful with it). Speccy app is used to display CPU core average temperature (between all 8 cores) along with GPUs and SSD temperatures. Room ambient temperature - 22C°.

Idle values (before the test): 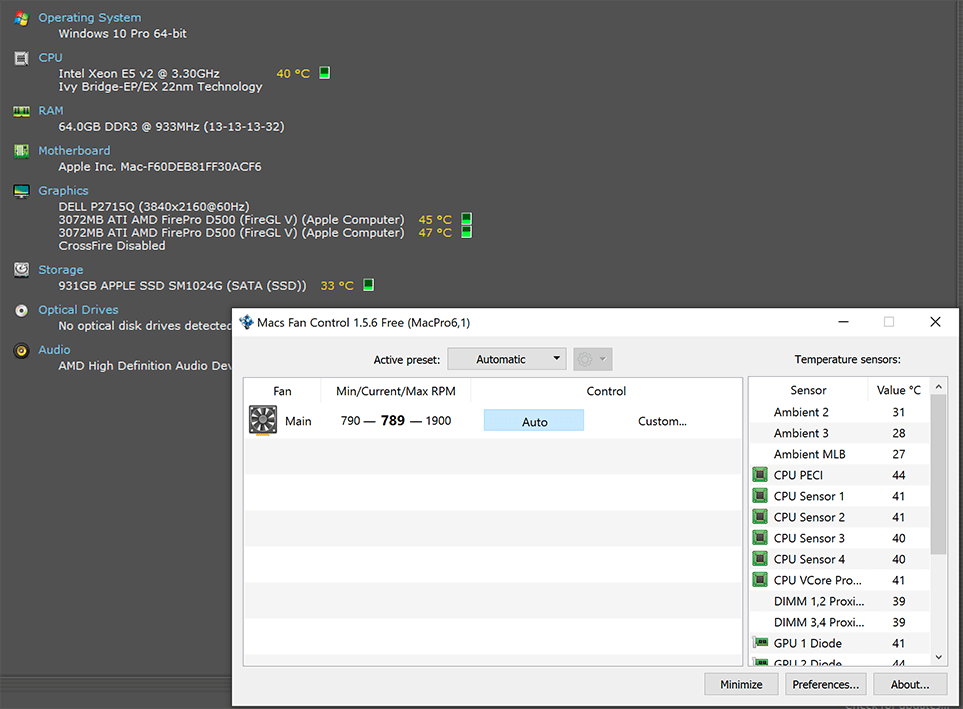 The fan is spinning at its minimum 790 RPM

After 10 minutes of AVX torture test: 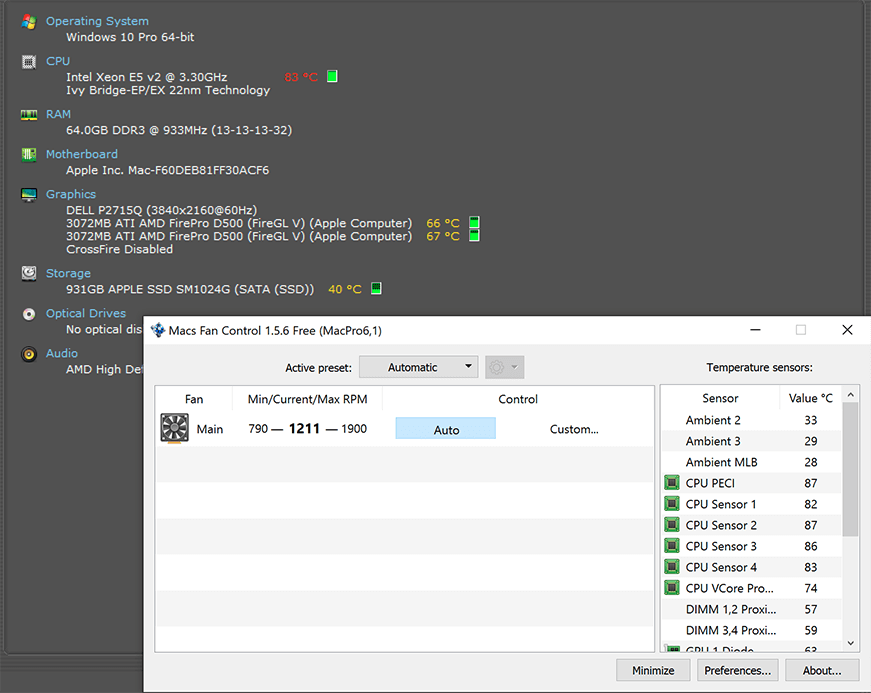 The fan is spinning at around 1200 RPM

CPU Core Average reaches 83C° after 4 minutes and remains there with fan spinning at around 1200 RPM. D500 GPU temperatures are at 66-67C° without any load and SSD temperature reaches 40C°. This is the price you pay for a computer in a compact stylish form-factor where basically all internals suffer from heat. What is more important, the default fan curve is VERY conservative to our mind: the fan starts to spin up after temperature already reached 80C! That’s why a custom fan control for long CPU intensive tasks is preferred on this machine.

After the stress test is finished, the fan returns immediately to the minimum speed and all components (CPU/GPU/SSD) are slowly returning to the idle values. Even after 10 minutes of idle after the test, CPU temp sits at around 45C°, GPU at 51C° and SSD at 37C°.

On the other hand, if you manually set the fan spin at 1500 RPM, after about 3 minutes temperatures are back to idle values.

If you manually set the fan at 1500 RPM and do the test one more time, the situation drastically changes: 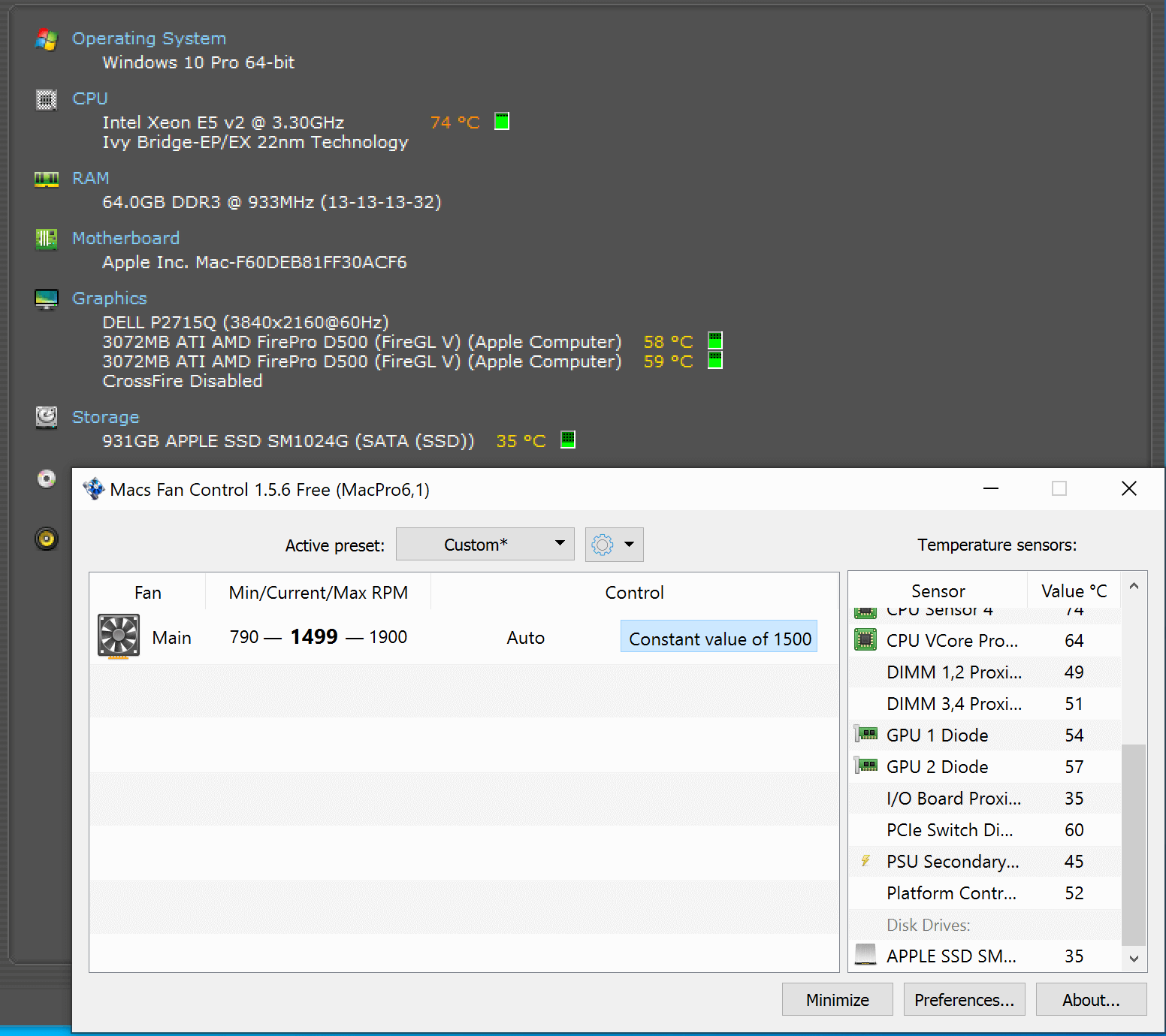 The fan is spinning at 1500 RPM, thermals are much better now

CPU and GPU temperatures dropped by around 9C° and SSD comfortly sits at 35C°. In a real world scenario with additional GPU and disk load added, custom fan control for Mac Pro trash can be basically essential.