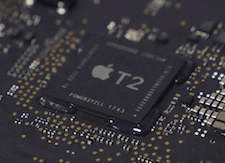 Update 2020: Now you can control fans on Windows 10 with the latest version of Macs Fan Control. Enjoy!

PS. There’s another restriction of the T2 chip not related to the app: it’s currently not possible to install any 3rdParty operating system except Windows 10 on Apple computers equipped with T2 chip (earlier some enthusiasts installed Linux). The T2 chip makes it impossible to see the internal drive, Apple generously did an exception only for Windows 10 (but only if you install it via Boot Camp). A possible option could be Linux installed on a USB/Thunderbolt external drive, unfortunately we tried this only for Windows but it worked (though the internal drive was not visible).